Almost exactly two years ago, I displayed a bit of last-second prescience by suggesting that DC Comics should reinvigorate Stephanie Brown, a clumsy, well-intentioned, oft-neglected but engaging, walking disaster of a character by making her Batgirl. I was very pleased to discover (that very day, in fact) that DC Comics had had the same idea several months before, and that Ms. Brown, formerly a sidekick to the Tim Drake Robin and Cassandra Cain Batgirl as The Spoiler, and later sidekick to Batman as the first in-continuity female Robin, was indeed finally going to step into her own as Batgirl, with Barbara Gordon as backup, no less.

This month, Stephanie’s run as Batgirl came to an end, and while it feels more than a little premature, and I’m less than happy that the DC relaunch appears that it will shove both Ms. Brown and her predecessor, Cassandra Cain, back into storage, I’m at least pleased that writer Brian Q. Miller gave her one of the more emotionally-satisfying sendoffs I’ve yet seen in the mass of DC titles that are coming to a rather forced mass conclusion. It’s an ending that’s not so much satisfying in terms of tying up a grand plot — like many other titles, Batgirl feels like it was in the middle of some long-term plans when the news came down from on high to pull everything together in two or three issues — as for really showing a great deal of respect for a character and what her fan base loves about her in a really creative way. 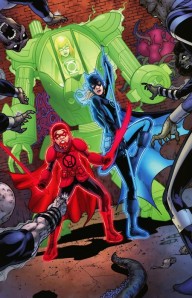 The final issue of Batgirl revolves around Stephanie re-encountering her father, a former walking disaster himself as the wanna-be supervillain The Cluemaster, who drugs Stephanie with a plant called the Black Mercy as a sort of a twisted way of giving his daughter everything she ever dreamed of. (The Black Mercy, created by Alan Moore in a great Superman story “For the Man Who Has Everything,” is a parasitic plant that keeps its host docile by creating a dreamworld in which its victim imagines that they have been granted all of their heart’s fondest desires.)

Batgirl fights her way out of the dreamworld, largely off-panel, but most of the last pages of the issue are given to reveals of the variety of dreams the Black Mercy gave to Stepanie — that is, Stephanie’s most fervent desires. The panels include visions of imagined pasts and futures: Stephanie, Cassandra, and Barbara together as Batgirls in the 1940s, Stephanie as the mother of a son who looks a lot like Tim Drake (and who also looks a lot like Damian Wayne, for those with an alternate preferred future love life for Ms. Brown), Stephanie in an apparently Nightwing-inspired costume fighting with a new Batgirl at her side, and my personal favorite, Stephanie fighting off an attack from the Royal Flush Gang at her own college graduation.

What’s striking about these images is they way in which they play into the Batman/Batgirl mythos, and the way in which they make Stephanie a more rounded character by recognizing the multiplicity of her desires. I’ve included in this post an image of Stephanie, Robin, and Oracle as lanterns, informed, of course, by the recent “Blackest Night” storyline. Like all of the images, it’s pitch-perfect, Damian’s anger making him a red lantern, and Barbara’s indomitable will as Oracle making her a green lantern. And Steph herself is exactly right as a blue lantern, her own hope and against-the-odds, against-everyone’s-opinion-of-her optimism being her particular contribution to the Bat family.

Which is less without her. Barbara Gordon is putting on the cape again, which, if it were going to be written by anyone other than Gail Simone, would simply be a crime. As it is, there’s nothing really to do but say goodbye, and hope that the rumors that Simone has plans for both Cassandra Cain and Stephanie Brown turn out to be true. We’ll miss you, Steph, again. We hope to see you soon.