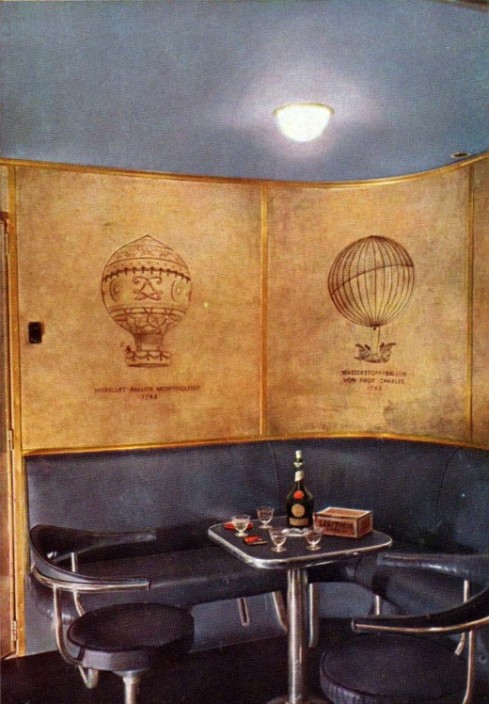 Color photographs of the passenger areas of the Hindenburg at Retronaut.co

There are so many reasons to love these photos, the least of which, maybe, is that the design in Indiana Jones and the Last Crusade was pretty close to correct. (It’s never actually stated that the Jones boys are traveling on the Hindenburg, so maybe there’s wiggle room for the extra bit of space and polish.)

The cultural history geek in me is a bit more wigged out (yes, that’s a technical term) over the pictures of the smoking(!) room. Beyond the glorious fact that the vehicle which suffered history’s most famous arial fire had a smoking room, the decor seems to be its own form of instant nostalgia. There are sepia-toned prints not only of earlier lighter-than-air crafts, but of other Zeppelin designs.

From Watchmen to Fringe, Zeppelins have become a visual shorthand for alternate realities, so it’s wonderfully mind-bending to see a bit of what one was really like. Doesn’t this seem like the kind of thing The Virgin Group’s Richard Branson would be trying to make profitable? Forget space shots, Sir Richard, give us airships!

One thought on “Vintage instant nostalgia”