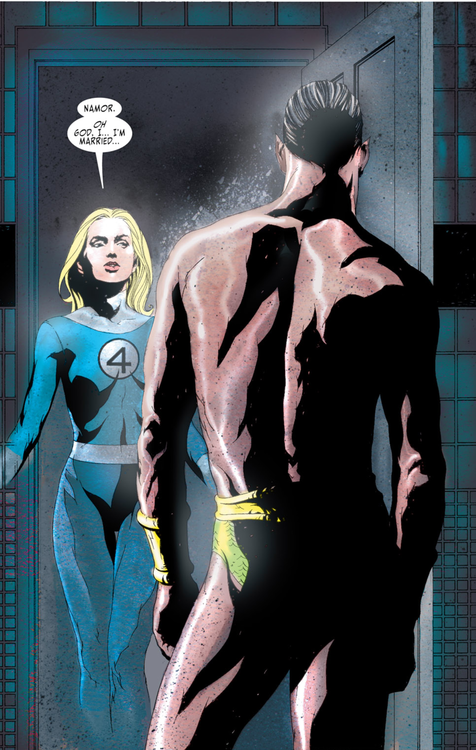 I’m assuming that if you read this blog, you’re familiar with The Hawkeye Initiative — an effort to critique hypersexualized (and often anatomically impossible) representations of female characters in comic books by replacing them with Hawkeye. (Of course, the Hawkeye Initiative isn’t the first effort to do something like this — when the Avengers film came out, there was a particularly on-point re-posing of the poster.) As with any project that goes viral, some of the entries in the Hawkeye Initiative are more convincing than others, and I’d like to suggest that at this point, it needs a supplement.

It may be a more challenging demand, but let’s find some genuine examples of (hyper?)sexualized presentations of men in comics — NOT as some effort to demonstrate similar or equal objectification (because that’s a proposition absurd on its face), but as the beginning, perhaps, of a discussion of what sexuality should look like in comics. Which is not to say that all sexualization of male characters in comics is unproblematic, but rather that sexuality is a topic that belongs in comics, and deserves to be discussed and portrayed in ways that reflect the variety of human experience, support good storytelling, and treat characters as interested and interesting individuals, not just as objects for fan service — particularly when that service panders almost exclusively to a stunted, adolescent, heterosexual male idea of sexuality.

As an initial entry, let me share Jae Lee’s version of Namor the Sub-Mariner from the 2001 Fantastic Four: 1234 mini-series. The narrative context is still deeply heterosexual, and we’ll leave aside for the moment whether the story’s portrayal of female sexuality and possible marital infidelity escapes heteronormative tropes (and the fact that Namor’s rear end is entirely in shadow) to appreciate the fact that in this drawing at least, Namor is unquestionably a sexual object. The posture, the miles of exposed flesh, the way that the rain dances off his shoulder. And no dislocated joints. It can totally be done, people. We should demand nothing less.