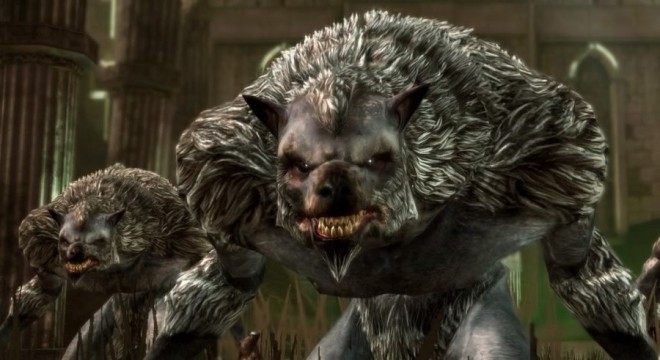 Notes on Dragon Age: Origins #8 — The uses and perils of lore as a storytelling tool

The first words I wrote in my notebook from the Brecilian Forest, verbatim: Werewolves! Shit.

I mean, werewolves. There aren’t vampires or a Frankenstein’s monster in Dragon Age: Origins, as far as I know — hey, there’s still time! — but there are full-on werewolves.

Well, maybe not full-on werewolves. The cranky, furry bipeds in Dragon Age don’t seem to transform back and forth between human and wolf (or elf and wolf) forms. In fact, they’re almost a bit more like what Tolkien might call a half-warg (Ew. Let’s not imagine how that might happen), except that Tolkien’s half-orcs aren’t people who turned into orcs, like these “werewolves” are people (and elves) who turned into wolf monsters. Because of a curse.

And I’ll get back to that curse, sort of, but I’m a bit more interested in why in the world I had such a reaction to the fact that Dragon Age threw me into a pack of werewolves. I’ve been fighting the undead (darkspawn), demons, spirits, ogres, bandits, soldiers, wolves, and there’s the promise of a dragon in the future, why not werewolves?

We all carry around in our heads masses and masses of what video games would call lore — conditions, backstories, and context that we use to sort out our experiences. Stories, that is, that help us build and recognize stories. When stories build on that lore, they offer both shortcuts for their creators and entry points for readers/players — stories that can appeal to lore don’t have to explain themselves quite so completely. Swords and magic? Got it. Lasers and spaceships? Okay, I get an idea where you’re going. Werewolves? Oh yeah, I know what those are.

So why in the world did werewolves, at least for me, come as something of a surprise? Why did they feel, well, a bit out of place?

Or is there a difference between a natural world that contains elements of the supernatural (beasts we don’t understand, who can change people when we encounter them), and “magic,” as we normally characterize it, which is almost a form of supernatural engineering — the manipulation of knowable supernatural properties in order to produce a desired effect?

For me, a werewolf falls much more into the first category than the second, which is possibly why I associate them much more with horror than fantasy.

And I might be way off on my own on this one. But that’s the unavoidable risk of appealing to (external) lore as a shortcut/entry point in storytelling— it’s a little bit different for each of us.