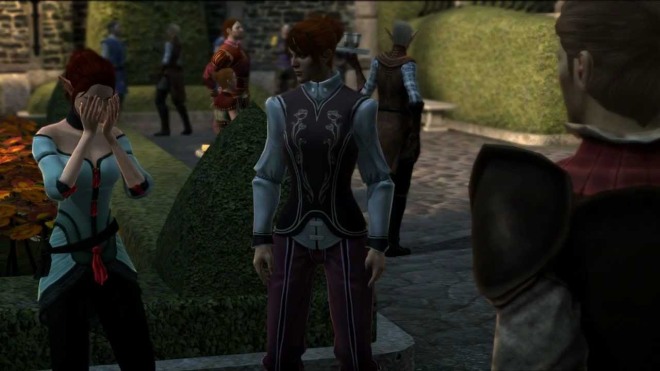 Greetings all, and apologies for missing last week, but I am now well and truly moved! The stuff that was once there is now here! And most of it is even out of boxes! True, I can’t open the oven, and that’s a bit. . . troublesome, but we’re working on it! (Just to be clear, there’s something actually wrong with the oven door—the cleaning lock is stuck. It’ll be fixed soon. I hope.)

But Dragon Age! That was a thing I was playing, right? It seems so long ago. Another game in another time and another world. This may be aggravated by the fact that I’ve booted up Dragon Age: Inquisition–just to take a peek, I promise!–which is not just a new game with a location and tonal shift, but marks the jump for me to Dragon Age on a new console. So I put it down. Soon, but not yet!

And then I packed my console, and now I’m here, looking through my notes from the third act of DA2–which seemed to have a lot of companion stuff going on. Of course, the second act did as well, but the third act kind of brings a couple of stories to their knock-down, drag-out conclusions, and starts to bring some old, familiar faces by for a visit.

And it was not a small thing for me that Leliana was one of the first DA:O cameos in DA2, act 3. She’s meant to bring a whisper of great danger in the threat of an Exalted March against Kirkwall, but I just about melted when Leliana is asked about the Grey Warden and responds “Yes, I knew the hero of Ferelden. She is. . . dear to my heart.”

The muddled verb tenses my reflect the weird dead/not-dead status of my Warden, but then again, love is messy, especially love that never quite gets to where it was intended.

Dammit, I don’t have time to play DA:O again.

And then it was like the DA:O companion floodgates opened. There’s Zevran, hunted by even more assassins, but still an unflappable flirt. Maybe I’ll kill him in my next DA:O playthrough just to see if he dies with that damn smile on his face.

But he’s so weirdly genuine! I can’t even say that he smirks, because he doesn’t. He just always seems to be having such a good time, and if it ends, it ends. It had to sometime, so why get upset about it.

King Alistair stops by, because that’s what he does. Any excuse to get out and about. War, darkspawn, a mall ribbon cutting ceremony. You know. Royal stuff.

What’s that about things not going well in Ferelden? Can’t be bothered. I have a city to worry about and piddly shit to do. Moving on!

Nathaniel pops up and name-drops the Architect. (Did I bring Anders on this mission? I don’t remember. If I play DA2 again, I’m going to be more particular about who I bring where, but that’s kind of one of the benefits of a second playthrough.) I kind of wish all that Awakening stuff seemed to have a bigger impact, but this is act 3, we have stuff to do! Narrative velocity and all that. Moving on!

I don’t actually have many notes on the third act DA2 companion quests, except for Merrill’s, which, um yeah. This might be a spoiler, so. . .

After the Keeper sacrificed herself to save Merrill from the demon trying to escape through Merrill’s mirror, Merrill and I killed her entire Dalish Elf group. All of them. That was kind of messed up, and I’m still kind of processing it. I mean, mechanically, it’s just another fight, but man, the whole all-or-nothing hostility system is harsh. Shouldn’t some of them have run away? Like, especially the ones down the mountain rather than the group that follows the Keeper to the cave.

Is there a way to make meaning of this? I don’t know. In the game, it’s just kind of a thing that happens, and then the main story eventually takes over, leaving the player to carry the little bits or drop them as they will. And yeah, I just called the massacre of a village a little thing, and that’s kind of messed up.

I dunno. I kind of need Merrill to come back in Inquisition, and I don’t know that she does in any significant way. Maybe it depends on the definition of “significant.” I need a way to make sense of this, or be forced to account for it, or something.

And on a completely different note, the Mark of the Assassin DLC reminded me a lot of the Mass Effect 3 Citadel DLC, and that’s definitely a good thing. It feels like a (creative) team stretching a bit after a job well done, with Merrill cracking in that way where you’re never sure whether it’s totally innocent or absolutely knowing about how Hawke’s house could use a garden because things “seem so grim all the time” in Kirkwall, and that “It’s so exciting to leave Kirkwall! I thought that every part of Kirkwall looked alike.”

It’s a wink-wink nod to the way that DA2 reuses building and cave models again and again, but in the context of this new, vibrant environment, it’s an in-joke that embraces the game’s audience.

Even better, to me, it’s an acknowledgement that grand stories can be fun and not just super dreary. Not that there’s anything wrong with big, grand, serious stories! But given that BioWare games are built so much on building “relationships” with companion characters, I really love when they give me an opportunity to just enjoy their company for a while.

So yay for fancy parties in BioWare games!

NEXT WEEK: THE END

A slightly different version of this note was originally shared through my TinyLetter, The Playthrough, where I am currently playing and writing about Dragon Age: Inquisition. You can subscribe to The Playthrough at http://tinyletter.com/theplaythrough