Sony’s 2001 Playstation 2 game Ico begins with a boy and three men on horseback. The boy shares a horse with a hooded man, the only person in the group who appears to not be wearing a horned helmet. The atmosphere is somber, silent except for the hoofbeats, brief flashes of forest green showing through the shadows. The company emerges from shadow into a ruined colonnade, brighter but still indistinct through the haze. The camera pulls back to reveal a castle built on an outcropping (an island?), with arches, impossibly tall, plummeting directly into the water beneath the walkways they support.

This sense of scale, of dizzying height is reinforced when the men and the boy enter the castle by boat, through a gate that resembles the Traitors’ Gate at the Tower of London both in form and the suggestion of its function. The castle the boy enters is still only glimpsed as if at a distance, so far overhead as if to be unreachable, a different realm, another world entirely.

In the book A History of God, Karen Armstrong describes the Hebrew word kaddosh, translated in the Old Testament as “holy,” as a word that conveys not so much sanctity, blessedness, or moral excellence, but absolute otherness. When the heavenly host cry “holy, holy, holy” before God, they are neither blessing nor describing blessedness but standing in awe before their absolute separation from and the absolute alienness of the divine. I get a bit of that from the opening moments of Ico — the glorious alienation of majesty, the indifference of the cosmos.

I’m still trying to figure out exactly how Ico makes that work, especially since the exaggeration of verticality is a pretty common trope in science fiction and fantasy. Think not just of the scale, say, of the Death Star, but of the bottomless chasms under the narrow walkways Ben Kenobi has to cross in order to deactivate the tractor beam preventing the Millennium Falcon’s escape. 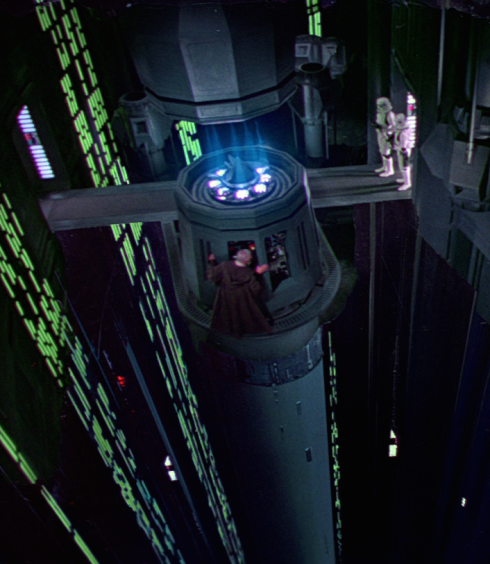 Or, one of my personal favorites, the scene of Gandalf fighting the Balrog in Khazad-dûm, especially once the camera pulls back (at about 1:55 in this clip) to show the pair falling, reduced by scale almost to slow motion, the lake still an eternity away.

I’ve had a handful of experiences with dizzying verticality in real-life architecture. I’ve climbed to the galleries in a handful of cathedrals, and looked out from the observation deck at a skyscraper, but I’m struck, as in Ico, at how looking up is a different experience than looking out or even looking down. I’m not terribly fond of heights, but it’s somehow far, far worse to look directly up the walls of the Willis Tower (formerly the Sears Tower) than it is to look out the windows of the top floor. The view from the top is an abstraction, a defiance of gravity achieved and done. When I look upward, I remember exactly how small I am.

It’s not exactly a religious experience, but it gives me just a bit of understanding of what it must have been like to walk into those cathedrals when they towered over the buildings surrounding them.

And Ico is still just a bit different. Perhaps because, at least at first, it utterly refuses to explain how the world works, or exactly what the stakes are. As it stands, about two hours into the game, I know that I am a boy, abandoned to die for having horns, but I only know this from a line of dialog. The men who abandoned me wore horns, as do many fantasy warriors, and I wasn’t immediately aware that my horns were different. It’s still not clear whether the men wore horns as badges of honor and courage, or as a way of marking the otherness (and shame) of their duties. And I don’t think it ever will be made clear.

It is clear that there is some connection between the luminescent girl — Yorda — and the boy. After all, he turns to stone if the shadows succeed in dragging her into the underworld, but I don’t know what that connection is or why it exists. There are so many stone caskets like the one the men locked me into. Does Yorda appear every time there is a sacrifice? Does every horned boy go through an experience like this? I haven’t found any other petrified boys. There weren’t any other broken caskets.

I don’t know, and so I walk slowly forward, crying “holy, holy, holy.”