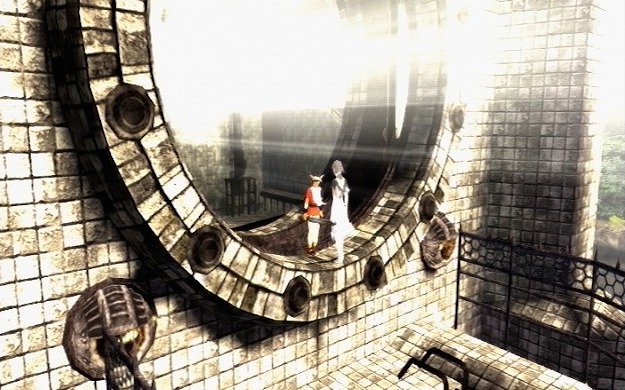 Dear readers, let me tell you a secret. I’ve finished Ico. It’s not a long game, after all. There’s even a trophy for completing the game in less than four hours and another for finishing in less than two.

I, however, would like to drag things out just a bit, so I’m going to pretend that I’m not done. There’s plenty to talk about, and it’d probably be good for me to write at least one post that’s a bit less, I don’t know, airy. There are so many little things worth touching on. So let’s make this my chatty post, and maybe I’ll do something dreamy again for the finale next week.

So anyway, in his post from last week, Daniel J. Hogan talks about the wonkiness of Ico‘s camera and controls, and cites me as attributing this to Ico being a relic of the Playstation 2 era, which I did say, but it was, um, in an email, so it’s probably worth talking about it a bit in public. I have strangely mixed feelings about PS2 games being re-released for the PS3. The resulting packages aren’t always of consistent quality. (I haven’t played it, but the Silent Hill collection is reputed to be a nightmare. And not in a good way.) In a perfect world, the PS3 would have the same near-universal backwards compatibility for PS2 games that the PS2 had for PS1 games. (And, in fact, you can play most PS1 games on your PS3, but unless you have an early-model system, not PS2 games, and not always even then.) I don’t love re-buying games I already own, but I am broadly in favor of keeping games available, and The Ico and Shadow of the Colossus Collection made Ico available to a large group of people who otherwise may never have played the game. Like me.

That said, playing PS2 games often feels like putting on an old pair of glasses that don’t really work anymore. Even when the edges are sharpened, like in The Ico and Shadow of the Colossus Collection, characters are blocky, and movements are clumsy. Part of this is a simple matter of fewer polygons and bigger pixels on an older system, but there’s also a way in which the Playstation 2 era feels like a transitional period between bit-limited iconic world and character designs and the current dominance of high-resolution naturalism. Sometimes PS2 fuzziness is strategic, where technical limitations are overcome through suggestion and blurred edges, but sometimes it can feel like retracing a learning curve. As a critic, this can be fascinating. As a player, it can be more than a little frustrating.

And, as Daniel notes, the PS3 port even preserves the unresponsive controls. I have no idea whether this has to do with emulation issues or if it’s a matter of the game’s base code. I do know the level of finesse and fidelity available from the DualShock 3, but when I play Ico, it feels like I’m using a DualShock 2. There’s a lot of (entirely justified) chatter about how much of an improvement the PlayStation 4’s new controller is over the PS3, but it’s striking to be reminded how much an improvement the PS3’s wireless controller was over the PS2.

(I’d also, Daniel, be interested to hear you talk more about how you experience the relationship between Ico and Yorda, and how, maybe it compares to Curly Brace in Cave Story. I’ve read a lot of people talk about their responses to the way the game encourages the player to hold her hand, but for me, this was more practical than emotional. Maybe I’ve just played too many escort games, and the mechanic was maybe not quite as broadly used back in 2001.)

Last week, I promised to talk about the sword, and unlocking it was indeed a cool moment. There are lots of really well-done scenes where gargantuan machinery rolls into action after Ico completes a puzzle, but it was nice to walk away with a useful item after opening the aperture in the East Arena. No more swinging a stick at malevolent shadows for me! Of course, once you find that initial sword, suddenly, they’re everywhere. Two or three of them at a time, just left on the floor. Functionally, it feels like something of a courtesy — the game declining to punish players who forget to pick up the sword again after having to trade it for a stick to light a lamp or set off a bomb. But the first time I found a second sword, I couldn’t quite wrap my head around the fact that it was identical to the one I already had. It just had to be better, or worse, or something, but it wasn’t. It was just another sword, in case I needed one.

So, is there anything else you want me to talk about before I finish up, Daniel or Sara? (Or you, dear reader?) Have either of you found yourself referring to a walkthrough? (I’ll fess up to having done so a few times. I’m only willing to get stuck for so long in a twelve-year-old game. Also, I wanted the spiked club, although that’s another funny story. . .)

Once more unto the breach, dear friends!

Week 3:
Big and Tall by Daniel J. Hogan at Clattertron

Week 2:
Take My Hand, Leave the Camera by Daniel J. Hogan at Clattertron
The Sound and the Fury by Sara Clemens at Videodame
Broken to work by Gavin Craig at GavinCraig.net